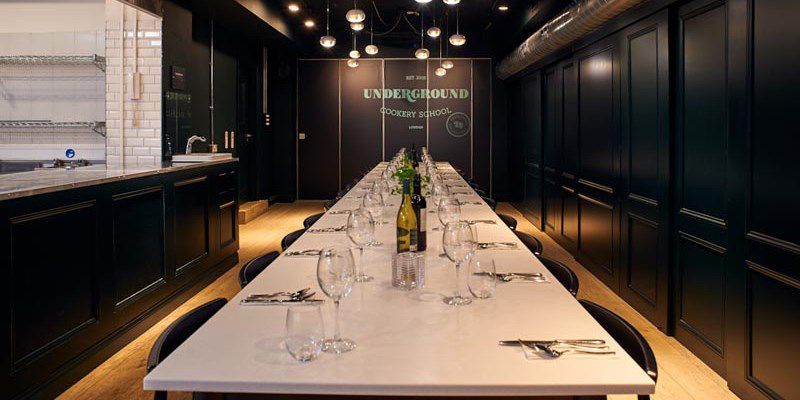 The modern obsession for achieving culinary mastery continues to grow. So when the popular Underground Cookery School in London was undergoing a refurbishment designed to bring its aesthetic appeal in line with its reputation, Corian® was an obvious choice of surface material.

The School offers meeting spaces and team-building cookery classes ; thus the design challenge was to create an interior that was practical, hygienic and robust, while adding an ambience of refined elegance. Designer James Plant chose to embrace the atmospheric subterranean location with a darkly glamorous mood in tones of deep blue and green for the dining area.

Lighting therefore became key to the concept. The addition of a dramatic, wave-like10 metre bespoke chandelier style installation works beautifully in combination with Corian® for the table tops, which, especially in translucent Arctic White, interacts with the variable illumination to ethereal effect.

The Artic White colour of Corian® is made with LightThrough™ Technology by DuPont, a manufacturing solution which gives the material additional translucency and enables fascinating and illuminating visual and design effects.

Another reason for choosing Corian® was to create a contemporary look while also paying homage to the traditional crisp white linen tablecloths of classic fine dining. What’s more, the durability and easy-care of Corian® means that this look can be maintained for the long term – all without the hassle of laundry bills.

Adaptability is also a key feature of the design, with sliding wood panelling used to open up or separate certain spaces. Their sleek tops take full advantage of the homogeneity and seamless joining capability of Corian® making them durable, resistant and easy to clean, while the slender surfaces and slim edge profiles lend a graceful lightness to the design.

James Plant says, “The Underground Cookery School has taken big steps since its inception in 2003 and now serves cuisine more akin to Michelin Star quality than that of a cookery school. My vision was to have a softly lit interior for the dining aspect, with bright white tables running down the centre, so the focus remained on the food. Using Corian® in Arctic Ice for the table tops in contrast with dark stained oak bases gives the feeling of a floating white surface, on which the colourful dishes would be presented.”

Corian® is highly appreciated in hospitality and food service settings, especially in venues where expectations of both performance and style are at the highest level.

All the Case Studies
related use and application