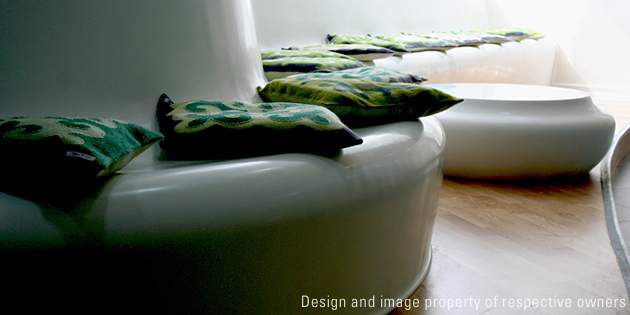 For the renovation of the Subsidiary Bank of “SberBank of Russia” central office in Almaty, Kazakhstan, the architectural and design studio Valent LLP chose Corian® solid surface and the technical skills of Art Strike Asia to create an unconventional interior design. SberBank, the largest financial institute in Central and Eastern Europe, sought an architectural and decorative solution able to match its corporate mission, values and colour identity.

To contrast with other architectural elements in SberBank’s green corporate colours, the designers chose Corian® solid surface in the popular Glacier White colour for the most important furnishing pieces. Its extraordinary formability allowed the impressive fabrication of a backlit cylindrical column. The column is skillfully cut at the top to create a stylised representation of a wheat field is formed. At the bottom, the column seamlessly incorporates a round bench that provides a large, comfortable seating solution. This unique seating area is complemented with a round stool, also made with Corian® solid surface. The office desks and coffee table bases, also made with Corian®, are elegantly curved to create a dynamic design that expresses a delicate movement.

The result is an unconventional environment completely removed from the concept of traditional bank interiors. This innovative project by architectural studio Valent LLP confers a minimalist design combined with typical elements of the traditional Kazakh yurt (home) and wheat fields, highlighting both the culture and economy of the country. The renovated offices of SberBank in Almaty show a rich and unique personality in line with the dynamism of this international company.

All of the Corian® elements were skillfully fabricated by Kazakh Company Art Strike Asia. Kazakh specialises in Corian® fabrication.

About Sberbank SB JSC – In 2006, "Sberbank of Russia,” the leader of the Russian financial system, the largest financial institution of the Central and Eastern Europe, acquired 99,99% shares in Texaka Bank.

In 2007, the Bank obtained a license to perform banking and other transactions, which are made by the banks, in national and foreign currency. The same year the authorised capital stock of the Bank was increased almost 15 times and amounted to 29 billion tenge (more than $240MM) permitting "Sberbank" SB JSC into the top 10 largest banks within the Republic of Kazakhstan, as per amount of authorised capital stock. Now "Sberbank" SB JSC is the Kazakhstani bank with Russian participation. It has a branch network consisting of 98 organisation departments, 13 of which are branches. The bank's central office is located in Almaty City.