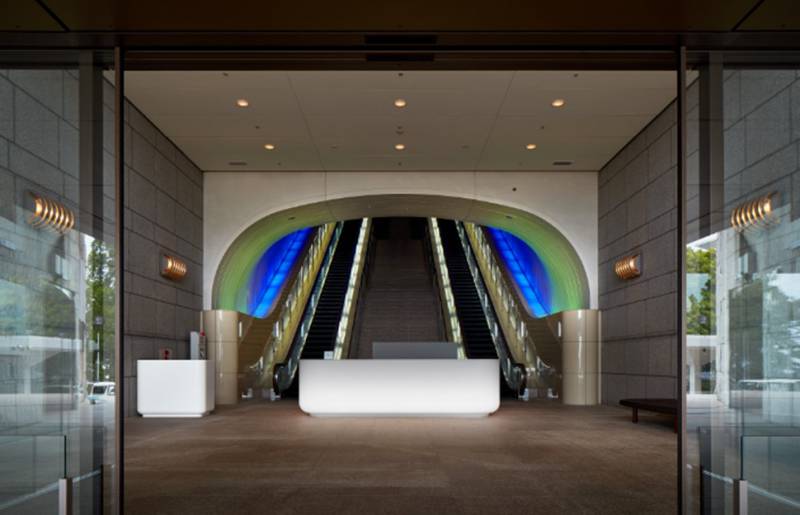 Corian® Solid Surface in the Glacier White colour has been used for various installations created for the renovation of the Museum of Art of Atami City (Shizuoka Prefecture, Japan); project by Takenaka Corporation; photo Yoshihito Imaeda, all rights reserved.

The MOA Museum of Art is located in Atami City, Shizuoka Prefecture with panoramic views of the picturesque SagamiBay. The building was designed to blend in with the surrounding natural environment and since it’s opening, has welcomed many visitors who come to see the valuable national treasures and important Cultural Properties. Another famous feature of this facility, Art Street, is a 200-meter-long space connecting the entrance at the foot of the mountain with the Main Building on its summit. Visitors travel 50 meters up an underground tunnel on escalators to approach the museum.

The entire museum was renovated and reopened in February 2017, on its 35th anniversary. The Art Street entrance hall also had some improvements which included anilluminated counter made from Corian® Solid Surface.

We spoke with Messrs. Yasuhiro Tachibana, Hideki Yamachika, and Kazuhisa Tozawa of Takenaka Corporation, who were involved in the design and construction of Art Street and other improvements. 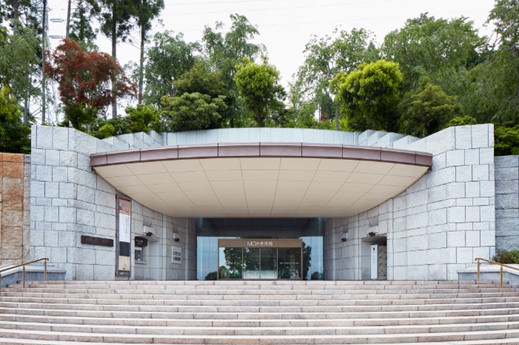 Mr. Tachibana said, “One issue was that the entrance hall is actually located rather far back, so it looked dark from outside and made it hard to tell if the museum was open. At first we considered ideas such as lighting the entire wall to improve visibility.” However, the existing floors and walls were covered in stone and the ceiling was made from concrete paneling, which resulted in a dignified look. In the end, an idea was adopted to resolve this challenge by utilizing the existing space and installing an illuminated counter in the center of the hall to create a completely different atmosphere.

“I thought about the image of placing a white-porcelain vessel made in the ‘hotarude’ method that lets light through,” said Mr. Tozawa. Together with brightening up the space, the design concept involved using the counter itself to express the concept of welcoming visitors. Mr. Yamachika said, “I thought that using all-over lighting rather than partial lighting on the countercounter would make it into a work of art and give a fresh impression. We chose Corian® because this material can accomplish this and can be fabricated seamlessly in three dimensions.”

The team paid particular attention to the lighting method. The light source was placed at the base of the counter to make it look like it was floating rather than giving it a heavy look.

“Our goal was to make the counter purposefully look like an exhibited object, rather than having it blend into the existing space. The feel of the material is abstracted thanks to the lighting, and the counter itself appears like an illuminated work of art. I think this gives it a presence that isn’t lost in the dignified, stone-covered space,” said Mr. Yamachika.

This illuminated counter lights up the entire hall and transforms the entrance into a space that enhances the feeling of expectation towards the MOA Museum of Art Main Building.. This case study demonstrates how the power of design can completely change the image of a space without doing large scale improvements and the expressive ability of Corian® Solid Surface.

Measures were taken when placing the light source and creating the counter structure to give the light a subtle gradation and ensure that the structure casted no shadows. The team made multiple adjustments while consulting with Apex, the company that provided cooperation for processing. Mr. Tachibana said, “Thanks to this, the finished counter fulfills nearly all of our expectations.” 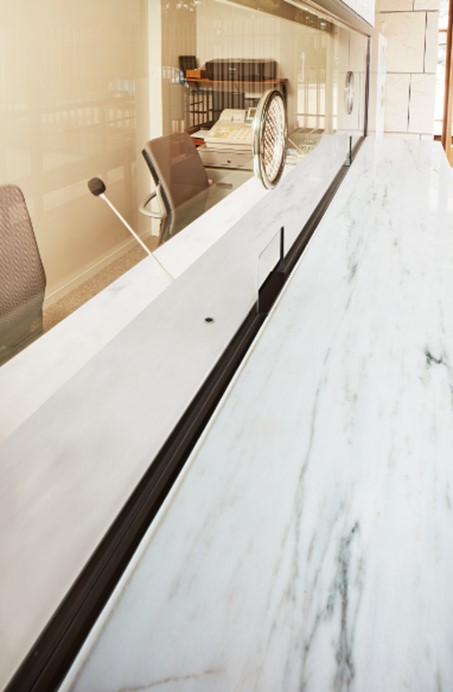 At the 3F ticket counter, the interior counter only was switched to Corian® Private Collection Gray Ripple. The exterior counter is made from kansuiseki 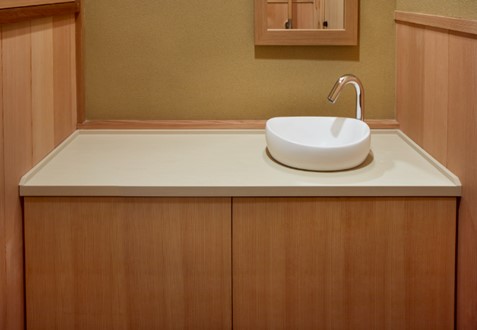 The newly built restroom counter in the museum’s Tea Room is made from Corian® Private Collection Ecru, which matches well with the unfinished wood.

A door made from Corian® Private Collection Gray Ripple was also installed at the 2F reception counter, which is made from kansuiseki.

In addition to the counter in the Art Street entrance hall, Corian® Solid Surface®was used in other parts of the MOA Museum of Art renovation work. As shown in the photographs above, this material is extremely easy to use when making partial renovation to existing construction because it comes in a wide range of colors and patterns and is easy to process according to different dimensions and shapes.

For instance, Corian® Private Collection Gray Ripple was chosen for the partial improvement to the ticket counter made from kansuiseki, a type of white marble produced in Japan that is hard to come by today, because the color and pattern of this material had a similar look.

In this way, the broad color and pattern lineup offers more choices, whether trying to blend in with existing materials or purposefully using colors of contrasting shades and looks as accents. One can create varied atmospheres by combining this material with existing components.

When doing work in existing buildings, often there are limitations on the sizes of objects that can be brought in and installation methods. Another reason Corian Solid Surface is an ideal material for renovation is that it can be carried in parts and seamlessly adhered on-site.

Nearly all renovation plans can pose challenges that must be resolved such as ease of use, design, and durability. Corian®can meet even the stringent requirements of various types, including functionality, durability, fabricability, material feel, design qualities, and its wide lineup of colors and patterns to choose from.

University of Barcelona in Bellvitge Campus