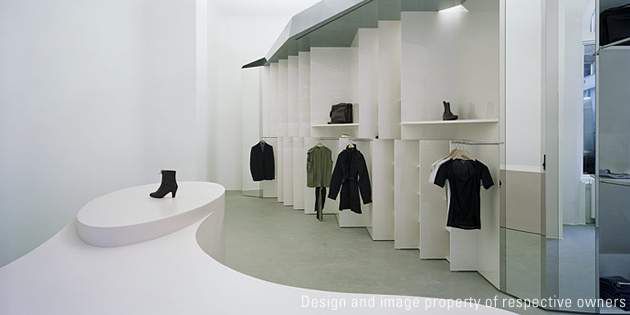 The Swedish jeans brand Acne recently opened a retail shop, the Acne-Store, in Berlin. The sophisticated, original design has no resemblance at all to conventional denim boutiques. The spectacular store was designed by Berlin architect Judith Haase with her partner Pierre Jorge Gonzalez. The most prominent feature of the shop is a multi-functional, organically formed sales counter made of Corian® solid surface. Shaped like a traditional tailor’s table, the counter also displays clothing and shoes.

Architect Judith Haase explains the reasons for using Corian® solid surface: “We love working with Corian® because of the way it reflects light. Playing with different materials, we frequently mix polished surfaces with matte ones such as Corian® solid surface. Its inconspicuous seams are important for the shape of the objects.” The custom-made table was fabricated by Matthias Klein GmbH out of Berlin.

Other shop highlights include a monumental closet which not only stores but also presents products. Its top is fitted with a “tank” containing electrical fittings as well as automatic screens which at night project images of the clothes as well as video clips.