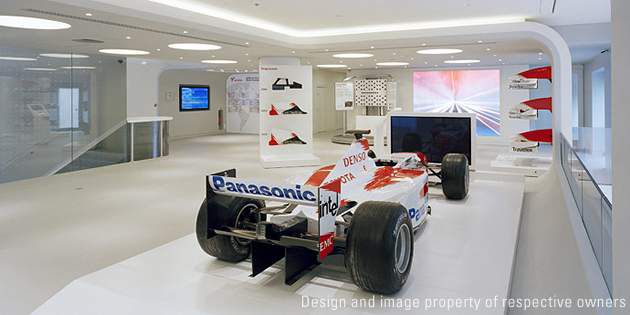 “Rendez-vous Toyota” recently opened its doors on the Champs Elysées in Paris, unveiling the largest Corian® solid surface structure ever made. It was created by French leading designer Ora Ito.

Eva Ziegler, Brand Experience Manager for Toyota, comments: “Innovation, superior quality, technology: Toyota’s three core values were the key considerations to embody our will to design a brand new and different place, a space of today and already a space of the future. Ora Ito’s project was thoroughly in line with these values. However, this meant a significant challenge since the virtual image he had devised had to be turned into a real space. A highly dedicated and reactive team was another key to our success. Alongside Ora Ito, were Lba Performances, headed by Thierry Leroux, as prime contractor and fabricator Créa Diffusion, member of the Corian® Quality Network of certified fabricators, to implement the material. This task required eight months of relentless efforts, but the result is well beyond our expectations.”

The Glacier White colour of Corian® solid surface, selected by Ora Ito, provides an immaterial feeling within an actual space. For the designer, the main point was to understand the brand and its message, then to express it through architecture.

“The brands that come to me want to enter my universe,” says Ora Ito. “My task is to blend my world with their own universe. When looking at the Toyota Space, which I designed entirely with Corian® solid surface and light-emitting diodes, people will say: ‘This is Ito and this is Toyota as well.’ What I like is the future, what appeals to me is tomorrow.”

‘Dead keen’ on Corian® solid surface (in his own terms), Ora Ito had already used it for the Parisian club Le Cab and for his ephemeral Museum for Milan’s 2005 Design Week.

The qualities Corian® solid surface made it possible to create a fluid environment and to further highlight the space, which capitalises as much as possible on the material’s capacities: thermoforming, machining, sublimation, inconspicuous seams, translucency for the light effects.

Nearly 400 square metres of Corian® solid surface were required for the Rendez-vous Toyota staircase, landing, handrails, pillars, coronas, consoles, platforms, bathroom surfaces and wall, signage and, of course, an entire wall that lights up into a visual enchantment thanks to the computer-controlled LEDs located behind several panels.

François Provence, project manager at Créa Diffusion, relates the feat: “First we had a long brainstorming process, which was very important as the project achievement would rest upon our decisions. Then, relentless processing the Corian® solid surface started in June. Here we had a brand new architectural approach, where the engineering must give way to the aesthetics – Corian® solid surface is a perfect match to this approach. Also, it was the first time in France that Corian® solid surface was not solely used for sheer interior arrangement. Of course, our experience with this material was a key factor in the unknown trials we had to face: finding the appropriate shapes for the 1000 LEDs installed behind the wall; managing the light; fine tuning the pre-machined sheets, and complying with the requirements of a building site. To sum it up, the challenges were many!”

He continues, “Ultimately, we learned something more from the interaction with the Corian® solid surface material: matter becomes light and turns into an image, which is a genuine breakthrough as it opens a variety of new possibilities to combine matter and the image.”

It is now recognised that with Corian® solid surface, the fabrication process, however sophisticated, is never apparent, thus creating this feeling of unlimited creativity. The fabricator/installer must understand the material on an emotional level as well as on the engineering level, and prioritise the emotion so that it is the only thing one can see in the finished product.

With this Rendez-vous Toyota, Corian® solid surface has become the most popular designer material on the Champs Elysées – one can also find it in other major brand spaces such as Grand Optical, Sephora, SFR, l’Atelier Renault, Häagen-Dazs® and Pierre Ricaud.