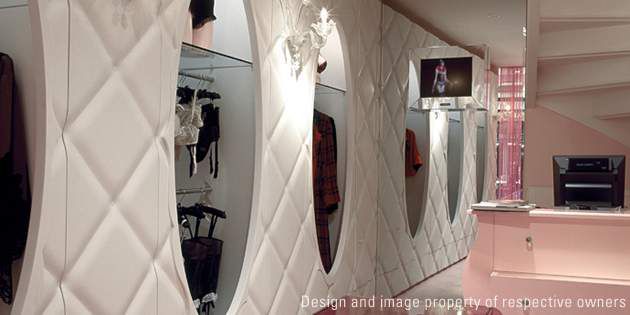 Corian® solid surface at the Chantal Thomass' flagstore in Paris

Christian Ghion, the designer of the Chantal Thomass’ Flagstore in Paris, selected Corian® solid surface as a decorative element and made it the key to the ‘refined boudoir’ interior design of this space, which has been appraised by the high fashion designer’s enthusiasts.

Relating the project genesis, Christian Ghion recalls: “For this store, the idea was to use the codes of Chantal Thomass’ world in a fresh, shifted way,” he says. “The padding is a recurring element in this world; what we had to do was to transpose it in its trimming and its visual and tactile perception. So, I looked for a material that could re-create the rhythm of the padding in its points and lines. Corian® solid surface was the obvious solution. The Cameo White hue I chose from the Corian® solid surface colour range, combined with sophisticated lighting effects, to provide a very subtle expression of the material, making it an elaborated work of art.”

An entire wall and its columns are covered with Corian® solid surface interior wall cladding. While the wall was a new challenge for Créa-Diffusion - the DuPont approved fabricator - the columns represented a genuine technical feat: each one was enclosed between two shells made with Corian® solid surface which were machined and thermoformed at Créa Diffusion, then assembled on site – with the diagonal lines of each shell matching very precisely with each another.

François Provence, creation and development manager for Créa-Diffusion, acknowledges that he was confronted with entirely new work research: “Christian Ghion wanted to re-create the padding aesthetic usually achieved with fabrics. We had to find a solution that would combine both texture and relief. Once again, Corian® amazed us with its capabilities. The unique result we achieved, which impressed our entire team, opens a whole new scope of creative options.”

“Christian Ghion succeeded to introduce the concept of a modern-day boudoir,” Geneviève Mardon, manager of Chantal Thomass store, enthuses. “Architects and designers come to the store to see the effect by themselves. The most astounding thing is to have been able to create a space that is both very bright, and thus attractive, and cozy. Furthermore, we were worried about the drawers, which are incorporated in the wall and made with Corian® solid surface interior wall cladding, because we feared they would be too heavy to handle. But this is absolutely not the case, which strengthens the sense of delicacy emanating from the material.”