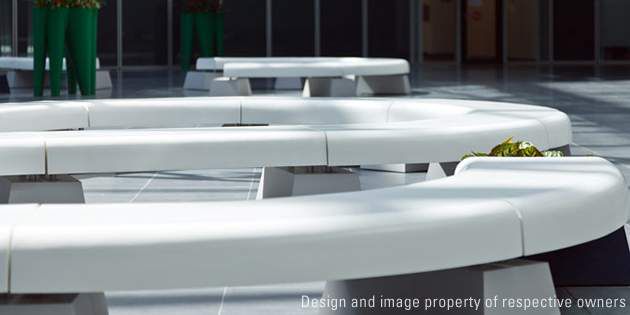 Petrom, the largest oil and gas producer in South Eastern Europe, decided to build a modern and comfortable headquarters in Bucharest, Romania. Petrom aimed to provide its employees with a unique office environment and align the company image with the highest international standards.

Construction of the new Bucharest headquarters - a compound of five buildings under the name of Petrom City – was commissioned to the Bucharest-based architectural studio Square One. Organic shaped furnishing elements in Corian® solid surface, natural stone, and light, pave the way for visitors between Petrom City’s two main buildings, The Corian® material was masterly fabricated by Ekero, a Romanian company that specialises in the fabrication of Corian® solid surface and is part of the Corian® Quality Network .

In the first building, Corian® was used to create reception desks, signage panels, benches and flower pot containers in two of the buildings’ atria. Created with natural stone and Corian® solid surface, the huge monolithic 14-metre long reception desk is curved at its end and smoothly transforms into the wall that continues on behind receptionist staff. The wall height gently decreases to create an area that includes flower pots and a bench. Four heights are linked together to create four functional areas. Each element is based on the same concept: natural stone for the base and a Corian® solid surface “organic skin” for the functional upper part. The two material layers are separated by LED illumination, an indirect light that underlines the division using soft lighting which gives a floating-like effect.

The atrium of the second main building is filled with modular round shaped Corian® benches that can be easily moved and stacked together to minimise the storage space, as this atrium is often used to host company events.

Adrian Cancer, partner architect of Square One studio comments, “We had to choose a material that could be curved and twisted to thermoform the parts, and also unite them on site to get a monolithic look with seamless joints. Corian® solid surface responded perfectly to these functional and technical requirements and the outcome is perfectly adapted to the Petrom transformation. Also, we had a strict deadline to finish the work and for this reason we did not use traditional architectural sketches that would have taken too long to implement. Instead, we sent the 3D files of our project to the fabricator that made the moulds very quickly, helping us save considerable time. The entire process from the virtual shapes to the physical implementation on site was incredibly smart and quick, with great results.”

The material aesthetics and its pure white colour combines perfectly with natural stone and gives give the entire structure a sense of lightness despite its huge dimensions.

About Petrom - With activities in the business segments of Exploration and Production, Refining, Marketing, Gas and Power, Petrom has proved oil and gas reserves of 854 mn boe, a maximum refining capacity of 8 million metric tons per year, approximately 540 filling stations in Romania and 270 filling stations in Moldova, Bulgaria and Serbia. In 2009, the turnover of the company was EUR 3,029 mn and EBITDA was EUR 696 million. After its privatization in 2004, the company recorded positive results. The modernization process initiated in 2005 is underway in accordance.

About Square One - Square One was formed in 2001 in Bucharest Romania. Its primary goal was to create visual art and experiments, unconventional spaces architectural installations in general visual forms of communication. It grew very fast given the demanding emerging Post Communist Romanian market and so the team widened the spectrum of knowledge in the field of architecture. By now Square One interior design portfolio includes TV news sets and editorial-offices spaces, library spaces, bars and restaurants, nightclubs and lounge, office, residential and retail spaces.

Since 2005 it has developed a construction oriented department and has built more than 5 residential ensembles, private housing units and commercial spaces, an approx 40,000 square metres of build space.