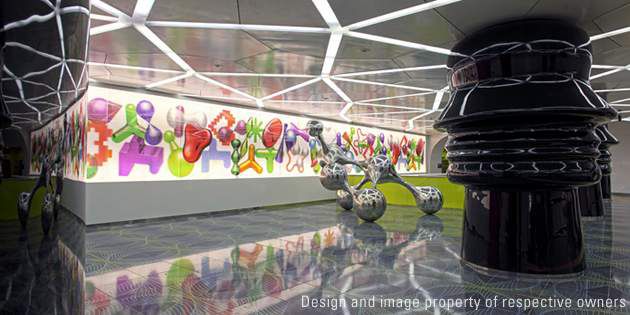 Naples, a Southern Italian city that dates back to the times of the earliest Romans, has inaugurated the new “Università” subway station serving the area of the town where the University of Naples is based). Characterised by extremely colourful, expressive and dynamic interiors, the subway station concept was conceived by New York-based American designer, Karim Rashid.

The new “Università” subway station is the first of five new stations integrating the Naples subway Line 1 that serves strategic areas of the town and is part of the “Art Stations” network produced by M.N. Metropolitana di Napoli. The “Art Stations,” all conceived by internationally renowned architects, are characterised with functional and wide spaces and are enriched with both interior and exterior design, including sculptures, installations and contemporary artwork.

Each day, tens of thousands of passengers reach the academic and multi-cultural area around the “Università” metro station and enjoy the inspiring interior design conceived by Karim Rashid. The mezzanine level of the new subway station in Naples is structured with four black columns clad with Corian® solid surface in Nocturne.

All situated close to the gates, two columns show a cylindrical section, while the other columns feature the profiles of huge heads. Nearby, the subway station control centre is clad with Corian® solid surface in Glacier White, thermoformed and invisibly joined to create a massive, flared cylindrical structure. The chromatic effect of the four black columns and the white control centre contrasts dramatically with the lively pop-style graphics on the floor and walls. The dynamic “light cuts” on the ceiling and the high-impact “Synopsis” sculpture are all design details by Rashid as well.

The station Corian® wall cladding features signature Karim Rashid pop colours (including tones in lime and pink specific to this project), characterised by the fluid shapes and iconic symbols. The overall result is an astonishing, uncommon surrounding for a subway station: curved walls, sculptural columns, vivid colours and graphics that confer a strong spatial personality.

The adjoining corridor is surrounded by fluidly shaped white walls that delightfully showcase the creative flexibility made possible by wall cladding made with Corian® solid surface. The length of the corridor (approximately 100 metres), the wall's irregular and organic curvature, as well as its glossy finish provide a striking environment. The complexity of the work required the precise skills of bsolid, a Naples-based company that specialises in the fabrication of Corian® solid surface. bsolid is part of the Corian® Quality Network and is able to create and develop solutions for architecture and interior design fields.

The whole interior design of the “Università” subway station is conceived to guide travellers on a pathway to knowledge and to stimulate creativity, imagination and reflection. Beyond aiming at guiding the traveller through the underground space in a fresh and exciting way, all decorative and structural elements of the environment create a link between the pragmatic function of the station and the academic and multi-cultural relevance of the city district.

This ambitious project also exalts the potential of Corian® solid surface. Thanks to its ability to be thermoformed and fabricated in a virtually seamless way, Corian® allows for visual continuity and a superior aesthetic impact, even under extreme structural conditions

About Karim Rashid – Karim Rashid is one of the most prolific designers of his generation, with over 3000 designs in production, 300 awards and work in over 35 countries are all attributes that attest to Karim’s legendary design work. His award winning designs include democratic objects such as the ubiquitous Garbo waste can and Oh Chair for Umbra, interiors such as the Morimoto restaurant, Philadelphia and Semiramis Hotel, Athens. Karim Rashid collaborated with clients to create democratic design for Method and Dirt Devil, furniture for Artemide and Magis, brand identity for Citibank and Hyundai, high tech products for LaCie and Samsung, and luxury goods for Veuve Clicquot and Swarovski, to name a few.

About M.N. Metropolitana di Napoli – M.N. Metropolitana di Napoli is the concessionary of Naples Municipality for the design and construction of Naples Underground Line 1. This is a major work launched to resolve urban mobility problems in Naples. In the Municipal Transport Plan, Line 1 is the primary connection for public urban area transport. It is linked to both the existing and future rail system, large interchange parking areas and, above all, to the “gates of the city”: the Port, The National Rail Linea, the Airport. The completion of Line 1 is of fundamental importance for the evolutionary process that is changing the physiognomy of the city of Naples.

As concessionary, the company has been an active partner in an ongoing process of urban texture generation, cooperating with Administration on all levels: study, design, economic planning, coordination and realisation. They have implemented a new approach aimed at creating an increasingly close link between the works and the territory - notable for both its great historical value, but also for situations of serious urban and social decay. The choice, the only one possible in a modern context, to insert contemporary art in the new architectural spaces, has resulted in the creation of the now world renowned “Stations of Art.”

This experience has also permitted M.N.Metropolitana di Napoli to take part in the design and implementation of the civil works of Naples underground Line 6, for which the Concessionary is Ansaldo Trasporti Sistemi Ferroviari, extending the same project criteria. M.N. Metropolitana di Napoli is a joint –stock company formed by the most important Italian firms in the infrastructure construction field. Stazione Università civil works have been performed by Toledo Scarl composed by Astaldi Spa and Moccia Irme Spa.