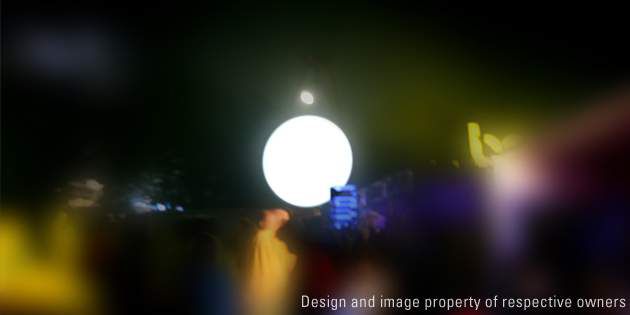 SPHERE hung moon-like in the night sky over the ‘Common’ area at the world’s largest and most legendary Glastonbury Music Festival, as part of its 40th birthday Celebration.

First created by Beveridge and exhibited in a different material twelve years ago, SPHERE was re-imagined and re-engineered by Matteblak, working with Corian® solid surface, to exploit the purity, formability, structural integrity and ethereal translucency of this high-performance material.
Suspended by crane in a carefully constructed steel cradle and measuring an impressive 12ft in diameter, the installation created an optical experience based on the phenomenon of a ‘whiteout’ where there are no gradations of light in the visual field.

Matteblak, who specialise in merging art, architecture and contemporary construction materials to create truly unique projects, chose to work with Corian® solid surface to create SPHERE as it offered the opportunity to apply and develop their use of a five axis ‘CNC’ engineering program to design and fabricate the seamless joints and the ‘perfect skin’ essential to the lighting concept.

The sculpture’s appearance ‘phases’ in both brightness and form, alternating between the perception of a sphere and a disc. The mesmerizing luminosity and appearance of ‘infinity’ is achieved by three light rings hidden by a lip and following the circumference of the interior. Experienced at ground level, the viewer standing close to the sculpture is surrounded by an even illumination. Sensitive time adjustment and integrated fading of the three colours chosen for Glastonbury - white, yellow and red to emulate sunset and moon rise – complete the effect, reverberating at different speeds as the entire structure is slowly raised and lowered.

About Matteblak : Matteblak is a boutique architectural design firm which offers a full service from design and consultation through to construction and project management. Matteblak also works with bright, new talent from the art world to create inspiring architectural interventions and interiors for homes, businesses and events.

About Patrick Beveridge : Patrick Beveridge was born in 1967 in Madrid and was educated in sculpture, philosophy and film, and studied colour and light in the work of James Turrell. The light phenomenon experienced in the original sculpture was described by German psychologists in the 1920s, and reinvestigated by NASA scientists in the 1960s, and featured in art works by the Californian light artist, James Turrell.